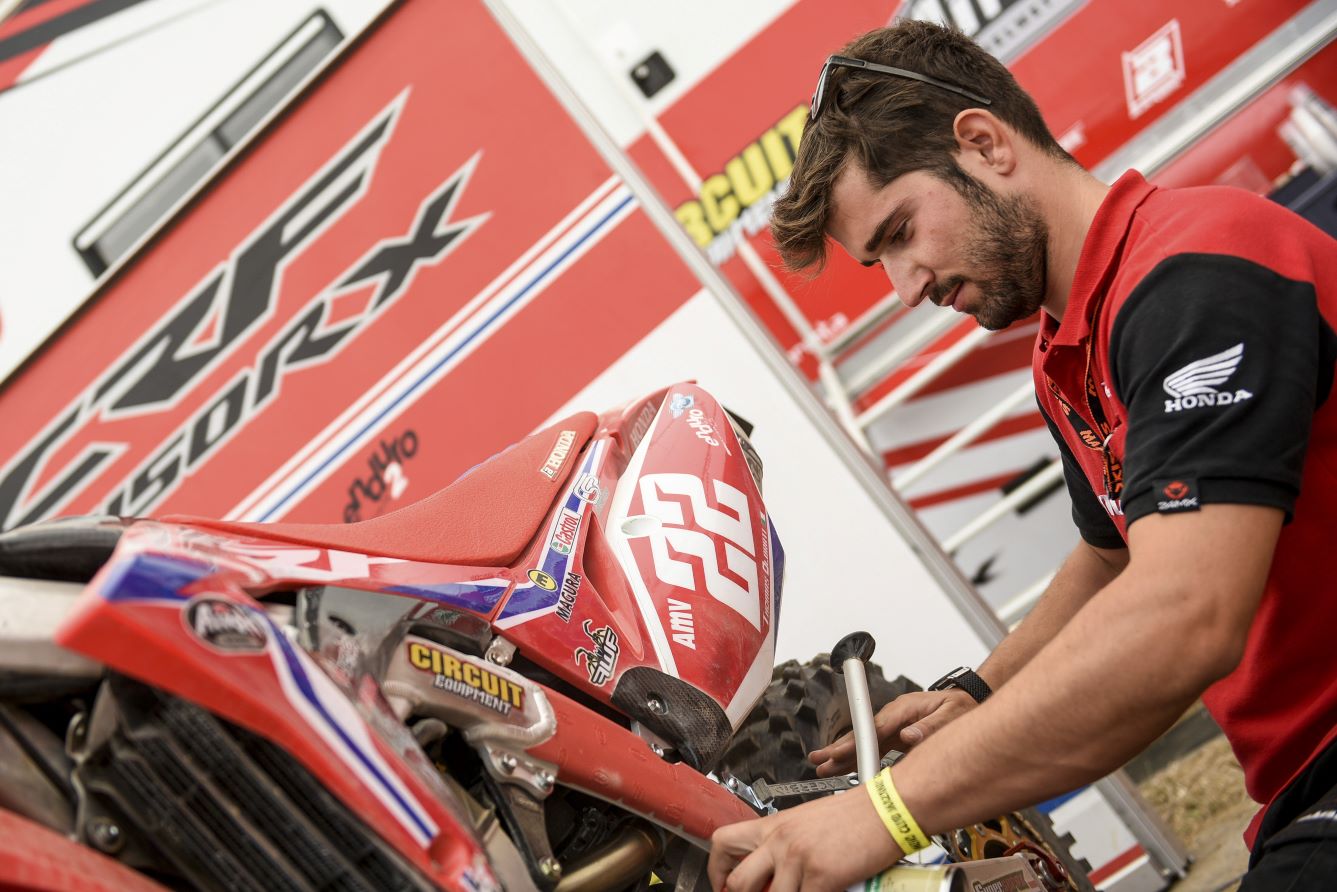 We are pleased to report an excerpt from Dario Agrati’s interview with Matteo Boffelli, realized for the magazine Moto Sprint on February 8th, 2022.

Agrati: First, a rider driven by your father Giuseppe’s passion for Enduro; then Thomas Oldrati’s personal technician since he competed with Husaberg and Husqvarna. Finally, team manager of the Honda Racing RedMoto team. How did the idea of setting up the official team come out?

Boffelli: I have been a hobby rider more than a rider and, thanks to a series of events that led me to fall in love with this fantastic sport, I started to follow the various championships, where I met Chicco Piana and Sabrina, who, like a family, assisted me in the first races and adventures as a mechanic. Chicco was an example of life and taught me that there’s a reason for everything. On the other hand, my father always says that you have to look ahead, copy from the good ones, and have a desire in the drawer. In 2012, when Bordone Ferrari began its decline and Thomas Oldrati was without a bike 10 days before the Finnish GP, me and Daniele Consonni took a production bike. From there, my dream was to become a modern manager of a team of my own. From that event, I started to follow the Enduro World Championship as a friend of Thomas; in 2014, Husqvarna Italia asked me to become a training mechanic for Oldrati. From 2015 to 2017, we managed a reference structure for the Italian market, in the Assoluti d’Italia, and in the Enduro World Championship. Only at the end of 2017, when the Ktm group wanted to abandon the enduro ship, Tullio Pellegrinelli told me that RedMoto was looking for an external person that could manage its Team. Time was short but I couldn’t say no.

Your team is based in San Pellegrino Terme, but there has never been any Factory formation in Val Brembana, despite the fact that Imerio Testori was born in San Giovani Bianco.

Bergamo is the land of enduro, with Testori, Gritti, Sala, Albergoni, Oldrati, Redondi, and Moroni. In Valle Brembana, no team has ever had a real venue, but there are several motorcycle clubs that try to bring people closer to the passion for this sport. The Bembana motorcycle club was  the first approach to the way of two wheels, for me.

Is it more difficult to be rider or to carry out the activity of team manager for the number-one motorcycle manufacturer in the world?

The levels I was racing at were really low, while managing a team of these levels and representing a brand like Honda are important commitments. In a moment, you find yourself having a double family where you are the reference. Everyone, including the mechanics, must arrive at the race trained; the bikes must be perfect, as well as the truck, social media, press releases.

You are involved also with the commitments of BBM Packaging, the family company leading  in the production of bottling and packaging machinery. How do you reconcile these responsibilities?

As the son of an entrepreneur, you have to be your father’s motivation, showing that what he is building is not an end in itself. In our family businesses – including BBM, the largest  – I am trying to make a step-by-step journey, ranging in the departments that need it, trying to reorganize and improve, as only those who feel the company as theirs can do.

In the last five years your team has grown more and more in close collaboration with Honda-RedMoto in a mix of mutual know-out.

We are their go-to team, so every piece of information matters; we are a resource for them to understand if the technical choices are the right ones, considering that our riders exploit the bikes at 120%. Fortunately, we start from a Honda base that has always proved to be one of the best for reliability.

How did the collaboration with Honda-RedMoto come about?

Everything was born from their interest in someone to manage the racing department. 2018 was a test, also because Mr. Motta was not convinced to continue with the sporting activity. Now, I believe that Red Moto has found a structure that gives the right prominence in terms of media and  image.

Is there a technical exchange of information also with Honda HRC Japan? If, yes in what details?

Unfortunately, HRC only follows a few disciplines. Our Team is under the coordination of Honda Racing Japan, but it is a lighter support than HRC. There are preferential channels for news and updates, but, for the most part, we manage between Desio and San Pellegrino.

In 2020, Thomas Oldrati contended in a season characterized by three injuries, finishing the world championship in seventh position and in second position in the Absolutes of Italy 450 4T. Now, Oldrati, returned to E1. Are these technical choices or also dictated by precise Honda marketing strategies?

Thomas is one of the Italian riders of reference in Enduro. His entry into Honda determined his rebirth and he ended  seasons at the top. For him, 2021 was definitely not the brightest year, but he showed that when he is in shape he is always there to fight in the top positions of the EGP. His transition to the 250 was indeed a marketing choice, but also the correction of my mistake in forcing him to return to the big bike when he was at the height of his motivation with the small quarter of a liter.

Let’s talk about 2022. How is your team composed this year?

In E2 with the CRF 450 RX Enduro we will have Nathan Watson, in E1 Thomas Oldrati and in the Junior Roni Kytonen on the new 250 RX Enduro.  In the last 2 races of 2021, Nathan has shown that  he has the right throttle to battle not only the class, but also the absolute of the Enduro GP. In these months, he has proved to be determined on the technical choices. I met Roni when he was 14 years old. Since then, he has always been improving and is very motivated. In addition, we will support Francesca Nocera for the Woman Enduro World Championship, and Rudy Moroni in the Italian Enduro.

Speaking of Nathan Watson, how did you manage to convince him to return to enduro after his disappointments in the EXTREME WESS enduros?

We have spoken several times since 2018, trying to make him go back to the Enduro. Last year, he went to Honda to run the sand races, which unfortunately were not held due to covid, and 20 days after the last GPs he contacted us to understand if a rider was needed for 2022.  Our answer was frank, with a counter-proposal that he did not expect: ok, on Monday you take a plane and try the bike, run the last GPs and in the we can talk about it.  After a few hours he accepted, showing that he had the right motivation to truncate the real Enduro.

How did you organize yourself with your technicians in the development of the new CRF 250 and 450 RX Enduro and what did you work on in particular in the various areas of the bikes?

I delegated everything to Diego Sonzogni, our Technical Manager. We have perfected the work done in 2021 on the 450, making it more suited to Nathan’s driving style, while on the 250 we started from scratch. Fortunately, we started from good foundations and with the help of our technical partners we achieved the goal of having a preformed bikes ready for all terrains. The remaining work consists only of small adjustments.

Who, among your three riders, is the most demanding in the development of the bike and what did Oldrati, Watson, Kytonen ask you?

We are really happy because all of them are satisfied with the bike without too many pretensions.

We aim high, the goal is to improve and we definitely want to win some GPs. For the championship, it is always difficult to set goals in advance.

Don’t you think that both in E1 and in E2, as well as in Junior the bar has really been raised with so many contenders for victory?

Yes, the level of the enduro world championship is coming back high: every year young people come forward and veterans do not give up, but  it is really stimulating for those who work there.

Do you have any replants for not having yet managed to win a world championship?

No, regrets are only for the wrong choices. I am young and I have time to try to win a world championship, we are working in the right direction.

Joys and sorrows with which pilots?

With Thomas Oldrati, we certainly had many joys, but also the pains. Other joys are certainly indelible with Charlier, Watson and Kytonen.  It is bad to list the pains, both for us and for the pilot. Honestly, I loved all the drivers, even if they often proved to be as detached as their sporting results.

If you had to choose a driver, what five names would you bet on?

Excluding those who will race for us, Freman, Garcia, Holcome, Verona and Rupect are the drivers with more talent.

In 2022, a new promoter will debut both in the World Championship and in the Absolutes of Italy. What would you ask of both of you for enduro?

I do not hide that I thought of applying as a promoter, because I believe that it is a fundamental  figure for sport.  I would advise the promoters to understand the potential they have in hand and invest in this, without expecting an immediate return, but with a right plan to bring our sport to the top. We need to invest more in image, copying the sports greater than us and organizing competitions in states where the public is greater. They need to find ways to be helpful to the clubs and not just put stakes by asking for contributions. They must create an organizational machine that works.